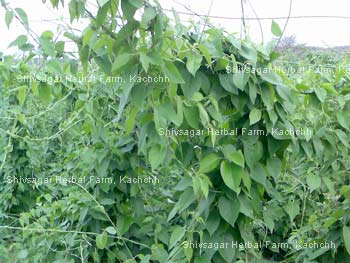 The plant is green colored twinning shrub. The stem is with cork like deeply cracked bark, branches numerous, tender ones glabrous. The leaves are coriaceous, ovate, acute, and glabrous above finely pubescent. Flowers are greenish yellow in lateral or subaxillary cymes, often with small hairs. The fruit follicles sub woody, 6 – 9 mm in length. The plant is also considered to be a Rasayana and included among the 10 Drugs constituting the Jivaniya Gana - `Vitalizing group` 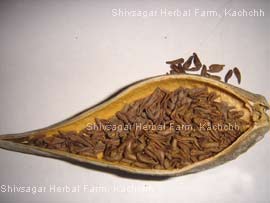 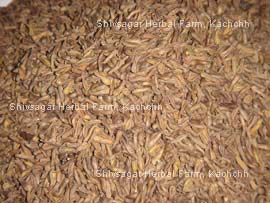 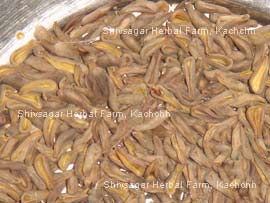 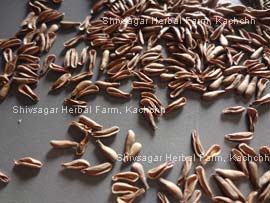 Antidepressant: Hakim (1964) reported the use of Leptadenia reticulata in the antidepressant drug named as Malkanguni. The constituents of Malkanguni was Celatsrus paniculata, Acorns calamus, Nardostachys jatamansi, Leptadenia reticulata. Usual dose of the drug was 10 to 15 min per day. In some Ayurvedic literature the dose was up to 60 min per day. The drug is effective without any side effect against for depression and also showed marked improvement in histeria.

Anti-abortificant: Achari and Sinha (1966) clinically trialed the use of leptaden in treatment of threatened and recurrent abortion. Leptaden is a herbal drug and each tablet consists of Jeevanti (Leptadenia reticulata) 150 mg and Kamboji (Breynia patens) 150 mg. During the trial period all the patients having known history of abortion were provided the Leptaden: 2 tablets t.d.s. and Progesterone (depot) 125 mg. I.M. was given once a week till 22nd week of pregnancy. They did not receive any other hormone treatment. Leptaden with Progesterone seem to have brought down the incidence of recurrent abortion. Safe and simple dosage of Leptaden is an additional advantage for its use throughout pregnancy.

Oligospermic treatment: Madaan and Madaan (1985) studied and evaluated the Speman tablets in the cases of oligospermia. Speman tablets (of The Himalaya Drug Co.) contains many reputed ayurvedic medicinal plants, Leptadenia reticulata is one of them with a composition of 32 mg in each tablate. During the experiment it was provided 2 t.i.d. orally for 3 months to the oligospermia patients. It was observed that the spemen remarkably improved the total count and the motility of the sperms. Speman is proved to be economical and very effective without any side-effects in ameliorating oligospermia.

Prostatic hyperplasia: Speman a Ayurvedic preparation consist of leptadenia reticulata (whole plant without roots) 16 mg kg-1 Qty. per tab. is used for the treatment of Benign Prostatic Hyperplasia. when the tablet of Speman (325 mg) (as informed by the manufacturer, The Himalaya Drug Co., Bombay) was given to the patients of benign prostatic hyperplasia, the drug bring about symptomatic relief by improving dynamics of micturation which is disturbed in BEP(Marya et al., 1995). Antianaphylactic effect: Padmalatha et al. (2002) studied the antianaphylactic effect of DLH-3041 (polyherbal formulation) on the rat mesenteric mast cells. DLH- 3041 (Himalaya Drug Company, Bangalore) is a herbal formulation. Leptadenia reticulata (stem) is one of the content plant of this formulation. DLH-3041 showed beneficial effect on degranulation actively and passively sensitized mesenteric mast cells.

Anticancerous activity: Sathiyanarayanan et al. (2007) evaluate the effect of ethanolic extract of Leptadenia reticulate leaves (LELR) against Dalton’s Ascitic Lymphoma (DAL). It was found that the ethanolic extract of leaves (200 mg kg- 1, i.p.) causes a significant increase in the life span and a decrease in the cancer cell number and tumour weight. The extract also normalized the hematological parameters. The decrease in the cancer cell number observed in the LELR treated group indicates that the test drug is having significant inhibitory effect on the tumor cell proliferation.

Anti-implantation activity: Rani et al. (2009) studied anti-implantation and hormonal activities of the ethanolic extract of the whole plants of Leptadenia reticulate. Ethanolic extract of the plant (300 mg kg-1) exhibited the strong anti- implantation (inhibition 100%) and uterotropic activity but no antiestrogenic activity was detected. It also induces a significant increase in the weight of genital organs of ovariactomized rats.

Cardiovascular activity: Mehrotra et al. (2007) explored that a large number of medicinal plants are used in Ayurveda, depending on the Doshas affecting the Hrd Rog (cardiac disorder), or to reduce obesity (Medorog) or inflammation (Shoth) are described. All these plants are used in Ayurved for the management of CVS disorders as per the specific etiology of the patient according to Ayurvedic principles. Leptadenia reticulate is one of the plants used for curing heart disease and also act as hypotensive.